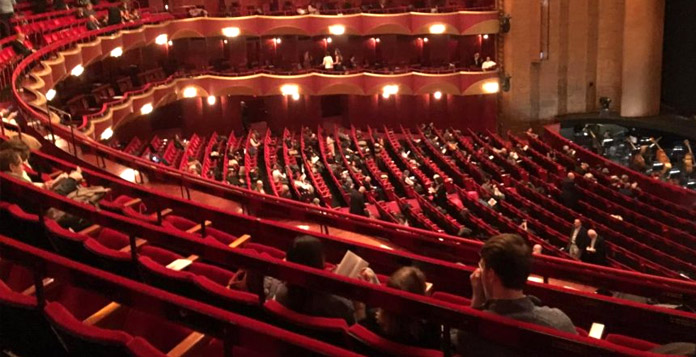 There are certain things in the Metropolitan Opera House at Lincoln Center that people rarely get to see. These are the things that would be of great interest to anyone who is curious about history and secrets. Now, it’s time that people knew about the stuff that has been largely unknown for over a century. So, here are those relatively hidden facts about the Metropolitan Opera:

1. There exists an armory in the Metropolitan Opera House

Just like the front spaces of the Metropolitan Opera House, the spaces supporting the productions are impressive as well. However, they’re located far beyond the side-stage and backstage areas. The back of the Metropolitan Opera House covers three levels below the stage. This includes the 16,400-square-foot storage and rehearsal rooms of the C level.

If you’ve ever been to the opera, you’ll know that the productions involve a lot of fights. So, to fulfill this requirement, the Met has an armory. It’s located at the back of the house. From its floor to the ceiling, the armory has weapons of different types and belonging to different eras. Among them are swords, cross bows, guns, and a wrecking ball from the medieval times.

2. There’s a climate-controlled archive inside the Met

In the mid-20th century, Mrs. John DeWitt Peltz entered the basement of the old Metropolitan Opera House. She was there as a volunteer. Upon entering the basement, she saw boxes of materials that had been lying there haphazardly for many years. She saved these boxes and organized them.

Among her finds were the minutes from the meeting of 1880. The board had decided to build a new opera house in the meeting. The Met established a department for archives formally in 1981. Robert Tuggle was given the responsibility to run this department.

The climate-controlled archives area stores artist ledgers, costumes and plenty of other items. The programs in the archives date back to 1883. The costumes are in boxes with large donations that came from the families of Kirsten Flagstad and Enrico Caruso.

The Metropolitan Archive has been working on the digitization of its archives in recent times. Led by the Director of Archives, Peter Clark, the Metropolitan Opera archives is located on level A.

3. The stage of the Met is among the world’s most technologically advanced

The stage of the Metropolitan Opera House is truly amazing! It allows for the most complex staging and productions. This stage even makes it possible to preset scenery and elevate it to different levels. It measures 80×101 feet and is one of the world’s most technologically advanced.

For the entrances and exits, there are 50 trap doors on the stage. It also allows for the appearance of scenery and props from below. The stage’s working areas on the side and the rear are equipped with wagons. They’re platforms that can go sliding onto the main stage with complete sets.

These sets can have a height of up to 30 feet. The rear wagon has a turntable with a diameter of 57 feet. While rolling forward, it can complete one revolution in two minutes. The fly system is located at a height of 110 feet above the stage. This is equivalent of a 10-story building.

The renowned American architect, Wallace Harrison, was the one who designed the Metropolitan Opera House. He had also designed the Rockefeller Center. The Metropolitan Opera House Company was in favor of an opera house that had a more traditional design. The other architects of the Lincoln Center wanted a Modernist look. Harrison had to examine about 42 other possible designs.

The structure that finally resulted from this was, in fact, a combination of competing interests in the design. The Metropolitan Opera House has curved Modernist lines, which would remind you of the TWA Flight Center. This repertory opera house can accommodate more than 3,900 people.

None of the repertory opera houses in the world can accommodate so many people. Let’s take the Sydney Opera House as an example here for the sake of comparison. The Sydney Opera House can seat an audience of up to 2,679. So, now you have an idea of the seating capacity of the Metropolitan Opera House.

5. The original location of the Met was not Lincoln Center

The idea for the foundation of The Metropolitan Opera came from a group of affluent individuals. They were the Roosevelts, the Vanderbilts, and J.P. Morgan. The opera was an alternative to The Academy of Music. You can find the details of The Academy of Music in The Age of Innocence by Edith Wharton. It was an exclusive concert hall for the elites of New York City.

The downtown was gradually becoming less desirable. The city’s industrial class wanted an opera house that was located close to their new mansions. They also wanted this new opera house to be welcoming to them. The Metropolitan Opera’s first house opened on the 39th Street and Broadway in the year 1883. This was right in the middle of the bustling theater district. This was truly an opulent opera house.

Its architect was Josiah Cleveland Cady. He was the one who designed the American Museum of Natural History’s south face. A fire occurred in the opera house, which led to a complete redesigning of the interior. This time, the design came from the famous American Beaux-Arts architecture firm, Carrere and Hastings. They created a golden auditorium with a proscenium. It was the largest in the United States at the time.

Inside the Met are two large paintings that hang above the Grand Tier level. One is The Sources of Music and the other is The Triumphs of Music. These paintings were the creation of Marc Chagall. He was commissioned to create these two murals. He was also given the responsibility of creating the design of the set and costumes. This was for the 1966 production of The Magic Flute by Mozart.

The two murals created by Chagall were hung in reverse placement accidentally. Jackie Wullschlager notes in her biography of Chagall that it was not what he had intended initially. Despite this, he liked the paintings in their reversed state. He, in fact, preferred it more than his original vision.